Even though prospecting for sales can be difficult, there are some small things that you can do to improve your results. One of those small sales tactics is to always keep in mind the concept of opportunity cost when deciding which prospects to spend your valuable time with.

Applying to Prospecting for Sales
Why this is an important to selling is that you only have so many hours to work with in the day and work week. In order to perform at the highest possible level, you need to get the most out of those hours and the key to that is maximizing the amount of time you spend with good prospects and minimizing the time you spend with bad prospects.

An Example of Spending Time with a Bad Sales Prospect
Let’s look at a quick example to display why this is so critical. As an example, let’s say that a prospect asks us to send over a proposal. Because we are in the process of prospecting for sales, we get very excited by this request and stop everything that we are doing and spend two days working on putting together a beautiful proposal.

We send over our proposal and end up losing out to the vendor that the prospect is currently doing business with. While losing the deal is not great, what is even worse is that we lost two days of productivity while working on the proposal.

If we would have known that there was a low probability of winning the business, maybe we could have sent over a boilerplate proposal that we could have spent an hour on instead of two days.

In the two days that we worked on the proposal, we could have spent that time doing phone prospecting looking for better quality prospects. Let’s assume that we could have generated four new qualified leads in those two days and with that being the case, the opportunity cost that we incurred by choosing to spend so much time on the prospect that requested a proposal was the loss of four qualified leads.

How to Make Decisions that Minimize the Opportunity Cost
The way to make the best decisions around where to spend your time when prospecting for sales is to be able to identify which prospects are good quality leads and which ones are poor quality leads that have a low probability to purchase.

If you are able to tell these prospects apart from one another, then you can improve your selection of what prospects you spend your valuable time with when prospecting for sales. 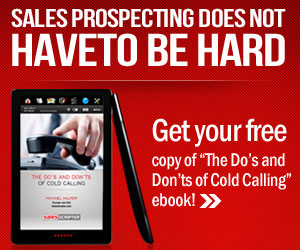